Leaders of the USSR described their environment as a "Socialist Paradise," claiming that it was entirely free of "decadent Western crimes" such as racketeering and serial murder.

Sadly, they were wrong. Dead wrong.

In fact, the Soviet Union had yet to be born on paper when its first known serial killer surfaced. He was Vasili Ivanovich Komaroff, dubbed "The Wolf of Moscow," a horse trader who, with wife Sophia, killed at least 33 victims between 1921 and 1923. The couple's efficient modus operandi involved luring male customers to their stable where Vasili plied them with vodka, slit their throats or bludgeoned them with hammers, robbed their corpses, and placed their bodies in trash bags for burial or dumping into the Moscow River.

Serial murder occurred in Russia's "Socialist Paradise” like it did everywhere else in the world and it continues unabated to the present day.

Iron Curtain Killers presents 26 cases of Russian serial killing, recorded from the 1960s into the 21st century. Law enforcement may no longer deny that such crimes occur in Russia, but as we shall see, sadly they fall short of solving many serial murder cases.

Michael Newton is author of the International Bestseller, The Encyclopedia of Serial Killers (Facts on File Crime Library) and over 300 more books (True Crime and Western Novels) 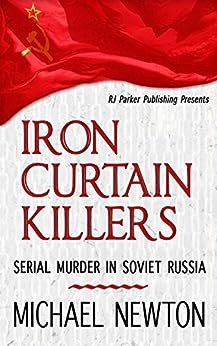 "WARNING: This book contains several crime scene photos that are graphic in nature and may be very disturbing to some people. Do not proceed if under the age of 18 or are disturbed by scenes of death and violence."One after another, young women disappeared without a trace in the night. One by one, their brutalized bodies turned up, the macabre crime scenes suggesting they shared the same cruel fate. Abducted, bound, and raped, all fell prey to an unknown killer, all became the victims of a deadly deception. ** This book is 190 pages and contains 34 photos.

Mikhail Popkov seemed to live the perfect life. Beautiful family, rewarding career, admiration and respect of the entire police force he worked with. Yet underneath, he had a deadly secret no one would ever believe...he moonlighted as a serial killer. His family and co-workers doubted his guilt in the beginning, but when he confessed to the crimes and led the police to his many dumping sites, they were horrified. In an effort to avoid Black Dolphin, Russia’s most feared prison, Popkov continued to list names and locations of more and more victims. When his kill count climbed above 81 souls, everyone wondered what could have caused this seemingly ordinary man to snap, carry out a never-before-seen reign of terror on the people of Russia, and turn into the worse serial killer in Russian history.